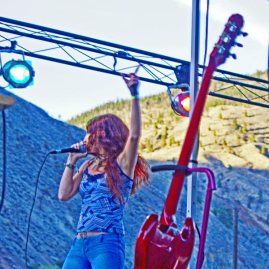 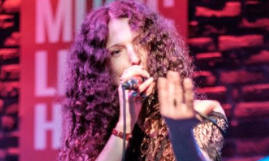 A WCMA-nominated singer living on Vancouver Island, B.C., Laura has fronted metal, blues and folk bands for over a decade. As a solo artist, she brings these musical influences together to create unique songs inspired by natural West Coast elements, honesty and dreams — all shared with a powerful, emotive voice.

“Your Stormy Ways” is the first single from her upcoming debut EP Hunting Season (to be released spring 2023). She also released three additional singles in 2022: “Grabbing a Ghost” (produced by Winston Hauschild); and “the cold makes you” and “fog the mirror” (produced by Paul Cimolini).

Laura began singing and writing for bands at a young age in and around Vancouver, B.C., Canada, and moved to the Interior where she started performing as a solo artist. She released “Run Outta Road” in 2011, written with guitarist Peter Thorne, and a filmed a music video by HunCity Productions that premiered at the South Cariboo Theatre.

In 2014, she was the lead vocalist for a symphonic metal band nominated for a Western Canadian Music Award (Best Hard Rock/Metal Album of the Year). That same year she released “My Time,” a single with all proceeds going to WAVAW (Women Against Violence Against Women) in Vancouver. In 2015, she wrote and organized a 10-song rock musical — Modern Banshee and the Limbic Landwalkers: the pool, the moon & the string — that premiered at the HR MacMillan Space Centre.

Throughout the years she has released various home recordings including the 2018 single “Love is a Spell,” featuring pianist Scott Arkell; Otta Sotta: the End of the Ocean? (2019), a six-track collection of songs inspired by the ocean and the conservation work of Farley Mowat (all proceeds go to Sea Shepherd); and From the Woods (2020), a collection of songs that were written while living in a cabin in the Cariboo.

Laura wrapped a busy summer 2022 of performing at festivals such as Islands Folk Festival (Duncan) and Sonic Summer Nights (Vancouver), and was the opener for Canadian musician Matthew Good on his fall 2022 solo tour of Vancouver Island.

As an acoustic act she has played in cafe and bar venues across B.C., as well as at festivals such as Desert Daze (Spences Bridge), 39 Days of July (Duncan), Hoot Stock (Forest Grove), VIEX, and Rockstock (Cariboo); and, in 2018, opened for Jeff Martin (The Tea Party) in Nanaimo. She’s also performed at the Rickshaw Theatre, Railway Club, Lana Lou’s and many other venues fronting bands like Vancouver funk/blues group Dispell and more.

Film
Along with producing many of her music videos, Laura enjoys working in film. Her short film tub, starring Maggie Bugg and Thomas Mitchell, won audience favourite in the 2021 CineCentral One-Minute Mobile Movie Awards. In 2022, Laura received a TELUS Storyhive grant to produce an eight-part miniseries called New Home, New Music, which profiled musicians who have immigrated to Canada and who now live in Nanaimo.